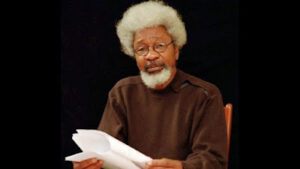 Wole Soyinka, the Nobel laureate, says consenting adults should be allowed to choose the kind of sexual orientation they want.

The playwright spoke when he was featured on the latest episode of #WithChude hosted by Chude Jideonwo, the media personality.

The award-winning author added that only those who understand “the whole science of hormones and the psychology involved in choice in human attraction” should have an opinion on sexual orientation.

Speaking on gay and transgender rights, Soyinka said: “Only those who understand the full makeup of human beings should even attempt to pronounce negatively on the sexual orientation of anybody.

“Anybody who has absolutely pursued the whole science of hormones, the psychology involved in choice in human attraction. I will listen to only that person who wants to speak negatively about sexual orientation.

“I believe that consenting adults should be left alone to do what they want as long as what they do and how they do it does not impinge on the rights of the rest of society and does not attempt to present their orientation as what should be the orientation of the rest of the world. Some of them go that far, and that is where they get into trouble with me.”

Commenting on ‘Ake: The Years of Childhood’, his memoir, Soyinka said he initially wanted to write about the late I.O. Ransome Kuti, his uncle who doubled as father of the late Fela Anikulapo.

“What I wanted to write was the biography of my uncle, I.O. Ransome Kuti, Fela’s father, from whom I had learnt a lot,” he said.

“I even told him that when I came home, I was going to write a biography on him. And then by the time I came home, he died on me. After he died, I realized, through him, that I wanted to recapture the entire ambience of that period and what it was like for a child.

“After some years, I decided to write Ake. And it took quite a while to enter the mind of a child, to try to capture that sense of wonder I recollected and also try to find a language for it”.