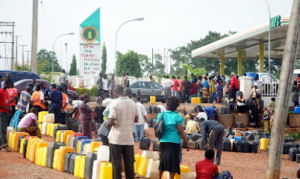 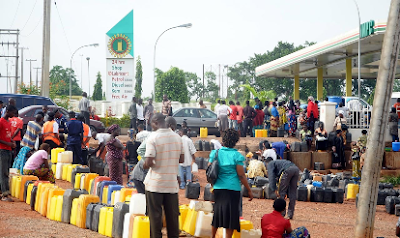 Another round of fuel scarcity has hit South-East States. This is coming despite assurances from the Federal Government that there was enough petrol in stock for the populace.

Already, the price of the product now hovers between N200 and N230 in most States in the zone.

Reacting to the outbursts that resulted in the increase on the price of petrol, the federal government maintained it did not increase pump price of petrol above the regulated cost of N165/litre.

The Government also disclosed that the hike in the cost of the commodity, currently between N175/litre and N230/litre, depending on the location of purchase, was done by oil marketers.

But the marketers had argued that the N165/litre approved price was not sustainable and was contributory to the scarcity of petrol in many locations nationwide.

They eventually hiked the pump price of petrol and maintained the price increase for several weeks running without any resistance by the government.

Based on the clarification by the federal government on the purported incremental cost on petroleum products across the country, the Nigeria Union of Petroleum and Natural Gas Workers (NUPENG), asked independent oil marketers to revert to the official depots’ price of petrol or risk unpleasant consequences.

National President of NUPENG, Prince William Akporeha and the Secretary-General, Afolabi Olawale, in a press release issued to newsmen, also uncovered that unscrupulous marketers are selling PMS (Petrol) from the depots at prices far above the official rate. They threatened to name and shame the affected marketers if they continued with their illegal action targeted at worsening the woes of Nigerians.

Countering the claim, the Southeast chapter of the umbrella body of oil marketers, Independent Petroleum Marketers Association of Nigeria (IPMAN) said, “It is no longer news that premium motor spirit, known as petrol is sold at N200 per litre in the Eastern part of Nigeria, including Port-Harcourt, Enugu, Owerri, Awka, Uyo, Cross River, Aba, Yenagoa, Makurdi, Lokoja,

“The real cause of hike in price is the incessant increment in price of premium spirit from private depot owners. A litre of fuel is being sold to us at the rate of N185 per litre. When you add transport and logistics including the exploitation by NUPENG in the name of union fee which is over One Hundred and Twenty Thousand Naira, N120,000, per truck, the price will be more than N200 per litre.

“Even at N200 per litre, considering the high cost of diesel to power the station and the exploitation from private tank depot owners and NUPENG, our business cannot thrive. Our various associations have met, and we have resolved to withdraw our services.

“Hence, we cannot cope with the harsh environment of doing business, caused by private depot owners and NUPENG. We are calling on the federal government to revive our various NNPC depots within the Eastern zone to enable us to get premium motor spirit at a regulated price. We are also calling on the Nigeria Labour Congress (NLC) and the management of NNPC to please appeal to the leadership of NUPENG to lessen our burden by reducing the loading fee.”

Our correspondent who monitored some major filling stations in Umuahia, the Abia State capital, Enugu and other States in the zone, observed that the product is now being sold above the government regulated price.

Meanwhile, a cross section of residents said they were devastated by the development and the negative effect it was having on other goods and services, wondering how they were going to celebrate Christmas and the New Year.

“The price of every commodity has gone high; how would average Nigerians afford N200 per litre of fuel? So, governments at all levels must come up with good economic blueprints for the country to strengthen the economy for the good of the populace,” a concerned resident said.