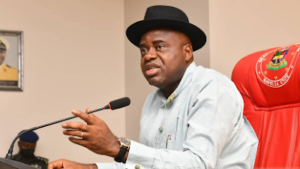 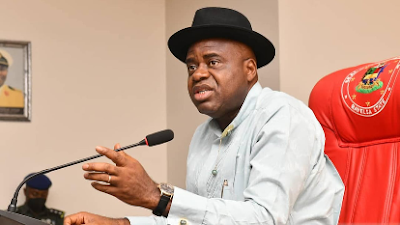 The Governor of Bayelsa State, Douye Diri, has presented a N385.2 billion budget estimate for 2023 to the State House of Assembly, with the Ministry of Works, Infrastructure, Education and Agriculture topping in allocation.

The Appropriation bill, christened “Budget of Sustainable Reconstruction’, is expected to be largely funded by 40 per cent from Federal Allocation receipts, 39 percent of 13 percent derivation fund, 5 percent Internally Generated Revenue (IGR), 4 percent of grants and 12 percent from loans.

Governor Diri, who pointed out that the compilation of the 2023 budget proposal was done after an Interactive session with stakeholders in September, 2022, said the budget takes into consideration the needs of the people of the state.

He also indicated that considering the 70.7 per cent implementation of the 2022 budget for Nine months, the 2023 budget proposal will take care of the personnel cost estimated at N635 billion, Overhead cost,N95 billion,Capital Expenditure, N167.5billion and Pension& gratituity, N14.7billion.

In the breakdown of funds allocated to Ministries in the state, Gov. Diri announced that Works & Infrastructure has N77.9billion, Education, N40.4billion, Agriculture, N14.1billion, Finance, N13.8billion, Health,12.5billion and Lands AND Housing, N7.2billion.

The Speaker of the Bayelsa State House of Assembly, Rt. Hon. Abraham Ngobere commended the State Governor, Senator Douye Diri for the ongoing projects at different levels of completion, describing the approaches adopted by the state government as tactical and commendable.

“On the budget, may I start by appreciating our governor and his team for their commitment, courage and character in implementing the 2022 budget in the face of daunting economic challenges.As a state we are particularly proud of the various ongoing projects at different levels of completion. Also, kudos to your tactical and unique approaches toward every sector in this administration”.

“Let me specifically commend your commitment in creating the enabling environment for projects such as the Yenagoa/Oporoma/Ukubie road with assurance of driving to Angiama before the end of this tenure. And, the West Senatorial Road as well as the Nembe/Brass road.Particularly, a mention must be made of the various constituency projects as these directly concern us as the representatives of the people. This brings about rural developments.”