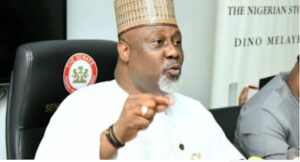 Dino Melaye, a former Kogi West Senator, has described a chieftain of the All Progressives Congress, APC, Fani-Kayode as a shameless and dishonourable addict.

Melaye made the remark while recounting an old comment Fani-Kayode made against the APC presidential running mate, Kashim Shettima.

Fani-Kayode, in an old tweet, had described Shettima and an ex-Governor of Borno State, Ali Modu Sheriff, as evil men.

The former Aviation Minister had said Sheriff and Shettima were responsible for the adopted Chibok schoolgirls and the establishment of Boko Haram.

Fani-Kayode had tweeted: “In Maiduguri, the citizens know that Gov. Shettima is the Boko Haram boss and keeper of Chibok girls – Sheriff

“Shettima is indeed the keeper of Chibok girls whilst Sheriff himself is the founder and father of Boko Haram. Both men are murderous, evil scum.”

However, Melaye recalled the past tweet while criticizing Fani-Kayode, whom he described as “Hungarian.”

In a tweet, the spokesman to the Peoples Democratic Party, PDP, presidential campaign team wrote: “See what shameless FFK said about Shettima before and now saying he is a man of integrity. What a dishonorable addict. Hungarian FFK.”

Recently, Fani-Kayode defected from PDP to APC and has been campaigning for Tinubu and Shettima.