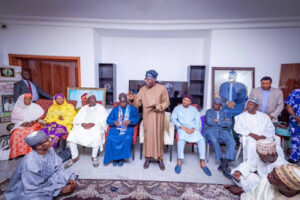 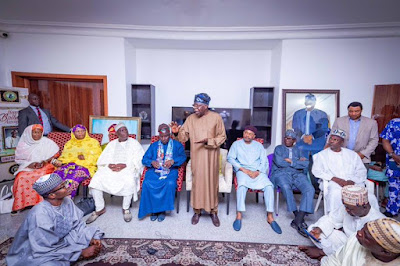 The All Progressives Congress (APC) presidential campaign council has explained why Bola Tinubu, its standard bearer, did not attend a town hall meeting for presidential candidates.

The meeting was organised by the Centre for Democracy and Development (CDD) and Arise Television on Sunday.

The former governor of Lagos was attending a meeting with some APC stakeholders while the town hall was ongoing.

The House Majority Leader visited Tinubu in company with the state House of Assembly member and the two local government chairmen from his constituency as well as other prominent leaders from the state. pic.twitter.com/TamBgbdPnY

In a statement, Festus Keyamo, spokesman of the campaign organisation, said Tinubu intends to treat every entity equally, adding that a number of networks have indicated interest to host similar events and it would not be fair if he makes selective appearances.

“As president of Nigeria, by the special grace of God, he intends to treat all persons and businesses fairly and equally,” he said.

“Secondly, the busy and hectic campaign schedules of Asiwaju Tinubu will not permit him to honour all such invitations by different radio and TV networks, hence our decision for him not to start with one TV station and later ignore others.

“Thirdly, our candidate had long before now realised the importance of speaking directly to Nigerians and shortly after unfolding his Action Plan as president embarked on town hall meetings beginning with his interaction with the business community and other stakeholders in Kano followed by the Town Hall meeting and presentation by experts last week in Lagos.

“Tomorrow, he will be interacting with Agro and Commodity Groups in Minna, Niger state.”