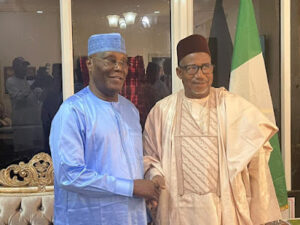 Atiku Abubakar, the presidential candidate of the Peoples Democratic Party (PDP), has met with Bala Mohammed, the governor of Bauchi state.

On November 3, Mohammed had, in a letter to Iyorchia Ayu, national chairman of the PDP, threatened to leave the party’s presidential campaign if Bauchi politicians loyal to Atiku continued to work against his reelection bid.

Ayu had led a delegation of some PDP chieftains to Bauchi on Saturday, adding that “they have come to brief Mohammed on some of the developments that are going on in the party.”

Commenting on the issue at the time, Debo Ologunagba, the spokesperson of the party, said steps have been taken to address the governor’s concerns.

On Tuesday, the governor visited Atiku in his Abuja residence to resolve the issues between them.

“Today, I led a delegation of Bauchi state stakeholders of the Peoples Democratic Party (PDP) to Abuja on a courtesy visit to the PDP presidential candidate, Atiku Abubakar. Key to our discussion were issues relating to the progress of our great party,” Mohammed posted on his Twitter page in the late hours of Tuesday.

Today, I led a delegation of Bauchi State stakeholders of the People’s Democratic Party (PDP) to Abuja on a courtesy visit to the PDP Presidential Candidate, Alhaji Atiku Abubakar. Key to our discussion were issues relating to the progress of our great party. pic.twitter.com/jMiSgsGi1e

This development is coming at a time the party is neck-deep in internal crisis which began after its presidential primary.

On Monday, Samuel Ortom, governor of Benue, had described the presidential candidate as his enemy.

Ortom said this on Sunday when he hosted his colleagues — Nyesom Wike of Rivers, Seyi Makinde of Oyo, Okezie Ikpeazu of Abia, and Ifeanyi Ugwuanyi of Enugu — in Makurdi, the Benue capital.