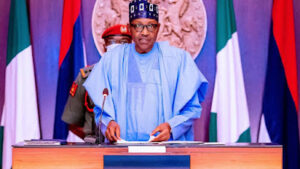 President Muhammadu Buhari has tackled Western leaders for failing to take responsibility for the climate disasters in Africa.

In an opinion authored by the president and published on Washington Post, he said a majority of the effects of climate change in Africa are from Western developments.

In 2009, developed countries most responsible for global warming pledged to give $100 billion annually by 2020 to help developing nations deal with its consequences.

The commitment has still not been met, generating mistrust and reluctance among some developing nations to accelerate their emissions reductions.

Buhari described the failure of the Western leaders to meet their commitments to the $100 billion fund as hypocritical as most of the emissions come from their industries situated in Africa.

“Many of my peers are frustrated with Western hypocrisy and its inability to take responsibility,” the president said.

“Governments have repeatedly failed to meet their commitments to the $100 billion fund for climate adaptation and mitigation in the developing world — for the mess their own industries caused.

“According to the United Nations, Africa is the continent worst affected by climate change despite contributing the least to it. Even though the COP27’s agenda notes the need for compensation for loss and damages (as distinct from adaptation and mitigation funding), that demand has mostly been met with silence in the West.”

Buhari accused the Western leaders of leeching on the continent’s natural resources and leaving its citizens out of the benefits.

He decried the injustice meted out on Africa, saying the actions give off the impression that Africans do not deserve a right to energy.

“Don’t tell Africans they can’t use their own resources. If Africa were to use all its known reserves of natural gas — the cleanest transitional fossil fuel — its share of global emissions would rise from a mere 3 percent to 3.5 percent,” Buhari said.

“We are not the problem. Don’t tell the poorest in the world that their marginal energy use will break the carbon budget — only to sign off on new domestic permits for oil and gas exploration. It gives the impression your citizens have more of a right to energy than Africans.

“When you realize you need Africa’s reserves, don’t cut its citizens out of the benefits. In the wake of the Ukraine war, there has been a resurgence of interest in Africa’s gas. But this impulse is coming from Western companies — backed by their governments — who are interested only in extracting these resources and then exporting them to Europe.

“Western development has unleashed climate catastrophe on my continent. Now, the rich countries’ green policies dictate that Africans should remain poor for the greater good. To compound the injustice, Africa’s hydrocarbons will be exploited after all — just not for Africans.

“The Western countries are unable to take politically difficult decisions that hurt domestically. Instead, they move the problem offshore, essentially dictating that the developing world must swallow the pill too bitter for their own voters’ palates. Africa didn’t cause the mess, yet we pay the price. At this year’s COP, that should be the starting point for all negotiations.”

At the ongoing COP27 in Egypt, the United Kingdom had said Nigeria will get a £95 million investment fund to support climate-resilient agriculture (CRA) in the country.