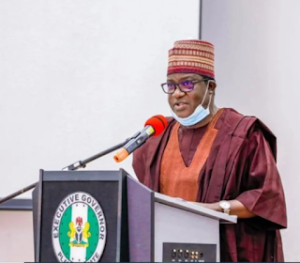 Governor Simon Lalong of Plateau State has expressed hope that the All Progressives Congress (APC) presidential candidate, Bola Tinubu will win the 2023 election.

Lalong said presidential candidates who flagged off their campaigns in Jos usually win the election.

Tinubu will on November 15 flag off his presidential campaign in Jos, Plateau State.

However, the governor said going by history, Tinubu will be Nigeria’s next president.

He spoke after inspecting the Rwang Pam Stadium, Jos, the venue of the APC presidential campaign flag-off.

The governor recalled that MKO Abiola and former President Olusegun Obasanjo both flagged off their presidential campaigns in Jos, adding that they won.

“MKO Abiola began his campaign in Jos and he won; same as former President Olusegun Obasanjo. We are optimistic that history will repeat itself and Tinubu will be elected president,’’ he said.

He thanked APC leaders for choosing Plateau, a state blessed with clement weather, for the historic event.