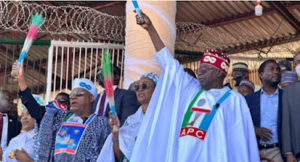 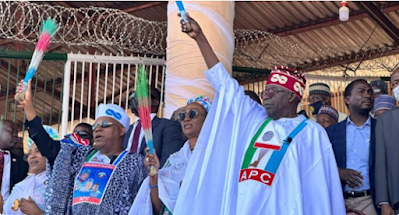 Bola Tinubu, presidential candidate of the All Progressives Congress (APC), has taken a swipe at Atiku Abubakar of the Peoples Democratic Party (PDP) and Peter Obi of the Labour Party (LP).

Tinubu spoke on Tuesday at the flag-off of the APC presidential campaign at Rwang Pam township stadium in Jos, the Plateau capital.

“One of them, I don’t want to call their names. Is it Atiku? Atilukated what? Wrong theory. Mark it down. Wrong theory for Atiku,” he said.

“Is it Obi? He is disobedient. He lives in Lagos, not in Anambra. He doesn’t know the road back to Anambra, so we will chart him another course.”

Taking a further dig at PDP, he said: “They want to come back. Tell them that a dead fish cannot be sweet in any soup.”

Addressing President Muhammadu Buhari, Tinubu said when history is written, it would be kind to him.

“Nigeria will not sink in the time of APC. When history of this period is objectively written, it will smile upon you. Don’t worry about what they say. This history will still be written by us,” he said.

“Hope is back and renewed. They thought they could bury the hope, but I recall from the speech I made in 2015. When there was a problem around WW2, the British were sinking. They turned to their general Winston Churchill. We were in trouble from 2011 up till 2015 and we turned to our general, Muhammadu Buhari.

“We put him where he embarked on the rehabilitation of the country and redeeming the nation’s promise. What did he do? He started by dismantling strange flags in our LGAs. We say ‘thank you, sir’.”