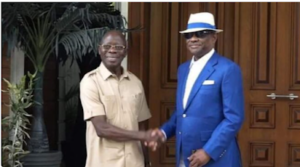 Nyesom Wike, governor of Rivers, has apologised to Adams Oshiomhole, former chairman of the All Progressives Congress (APC), for supporting the re-election of Godwin Obaseki as Edo governor.

Speaking on Wednesday at the inauguration of the Rumuepirikom flyover in Obio-Akpor LGA of the state, Wike said he is now friends with Oshiomhole.

Obaseki and Wike are both governors on the platform of the Peoples Democratic Party (PDP).

Wike had supported Obaseki’s re-election bid in 2020 after the Edo governor defected from the APC to the PDP in the wake of his fallout with Oshiomhole, his ally-turned-political foe.

However, both PDP governors were engaged in a feud earlier in 2022, and do not seem to be currently on friendly terms.

Addressing Oshiomhole at the inauguration, Wike said he has learned from the past.

“I use this opportunity to apologise to you. I came to Edo state to make sure your candidate didn’t win election. And I was virtually in charge, every day, coming out on television to take you on,” Wike said.

“I said you will not win and you didn’t win. That assignment has been done and we now know who is who.

“I want to tell my people and sincerely apologise to you. You know, each time you learn. People will praise you when you do for them. The day you say ‘no, you’re wrong’, they begin to say all sorts of things.

“I’m sure those of them in my party before cannot say anything without mentioning Wike. But because I said let the right thing be done, let agreement be agreement, I have now become a nobody, an enemy — these are people who are praising me morning and night.”

The Rivers governor also made a reference to the 2019 elections, adding that Oshiomhole and the APC challenged him in Rivers at the time.

THE WIKE VS OBASEKI DRAMA

This is not the first time Wike would take a swipe at Obaseki.

In March, Wike had said he regretted backing Obaseki in the 2020 governorship election, describing him as a “serial betrayal”.

“If you go and check the DNA of Obaseki, what you will see in that DNA is betrayal, serial betrayal, and ungratefulness,” Wike had said.

Oshiomhole, who was governor of Edo from 2008 to 2016, was succeeded by Obaseki, who was then a member of the APC.

The duo, however, fell out, with Oshiomhole backing Osagie Ize-Iyamu for the governorship race on the APC platform.

Obaseki subsequently defected to the PDP and was handed the party’s ticket, and went ahead to win the election.