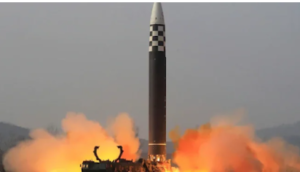 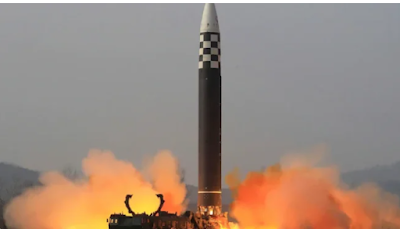 Hamada said the weapon, launched on Friday, reached an altitude of 6,000km and could travel as far as 15,000km.

According to the defence minister, the missile has the potential to launch strikes on all US mainland.

“Based on calculations taking the trajectory into account, the ballistic missile this time around could have had a range capability of 15,000km, depending on the weight of its warhead, and if that’s the case, it means the US mainland was within its range,” the minister said.

“We naturally lodged a strong protest against North Korea, which has repeated its provocations with unprecedented frequency,” Kishida told reporters in Thailand.

“We have told Pyongyang that we absolutely cannot tolerate such actions,” the PM added.

The US has vowed to take “all necessary measures” to assure the safety of its territory and its allies – South Korea and Japan.

Kamala Harris, the US vice president, met with the leaders of Japan, South Korea, Canada, Australia and New Zealand in an emergency meeting, where she described the missile launch as a “brazen violation.”

“We again call for North Korea to stop further unlawful, destabilizing acts. On behalf of the United States, I reaffirm our ironclad commitment to our Indo-Pacific alliances,” Harris said at the start of the meeting. “Together the countries represented here will continue to urge North Korea to commit to serious and sustained diplomacy, ” she said.

She’s also said to be looking to convene a meeting of world leaders to discuss the launch.

The latest missile test by North Korea comes just a day after Choe Son Hui, the country’s foreign affairs minister, warned of a “fiercer” response to an increased US military presence in the region.

The missile launch was a reaction to the meeting between US president Joe Biden and the leaders of South Korea, Japan and Cambodia where all countries present agreed on more military cooperation.