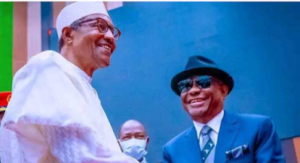 Buhari spoke on Friday during the inauguration of the Nabo Graham Douglas campus of the Nigerian Law School in Rumueme, Port Harcourt.

Represented by Abubakar Malami, attorney-general of the federation, Buhari commended Wike for his support of legal education in the country.

The president described the new law school as “a grand wonder”, structured to be self-sustaining.

He noted that the project, among several others, is an abiding testament to the commitment of Wike to the promotion of law and development in the state.

“I need not engage in poetic verbosity to properly describe the grand wonder that is being commissioned today,” he said.

“The icing on the cake is the fact that this edifice and its state-of-the-art facilities are structured to be self-sustaining through associated revenue earners, as designed by a man of higher vision who is now fondly referred to as Mr Project.”

Buhari said he is aware that Wike extended development initiatives to the neighbouring Bayelsa by executing multi-billion-naira projects that included a 900-bed space hostel and 1,500-capacity auditorium in the Yenagoa campus of the Nigerian Law School.

“These are indeed pace-setting and unparalleled contributions by a state government to what is ordinarily under the remit of the federal government,” he said.

“Wike’s dedication to these projects is better appreciated from the viewpoint of his being an unrelenting advocate of true federalism in Nigeria.

“Indeed, our dear nation needs more of such unifying efforts; It is in recognition of the foregoing that my administration discarded political considerations and acknowledged excellence by conferring Gov.Wike with the Nigerian Excellence Award in public service.

“Your excellency, you have indeed immortalised yourself, and history will be kind to you.”

Buhari reiterated the need to promote cooperation and understanding between the federal and state governments in the overall national interest and the welfare of Nigerians.