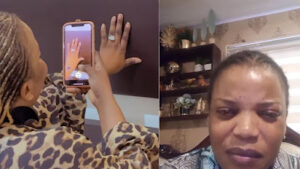 Empress Njamah, the Nollywood actress, has finally broken her silence over claims she is engaged.

The film star has been in the news since a video of her wearing an engagement ring was shared on her Instagram page on Thursday.

At the time, some of her colleagues had warned the public to disregard the video, adding that her account was hacked.

Reacting to the incident in a now-viral video, Njamah confirmed that her account was hacked, adding that “I am a victim of blackmail”.

Njamah said the death of Ada Ameh, her friend, left her broken and vulnerable for months.

She said at the time, a man identified as Josh Wade came into her life and promised to stand by her.

Njamah said Wade, however, became abusive after he got naked footage of her.

“I’m just doing this video to clear the air. I’m a victim of blackmail but thank God I’m alive to tell you the story. It’s not easy coming out to do this, but I’m here doing it,” she said.

“A guy that one shouldn’t be called a human being came into my life under the pretense that he wants to marry me. I didn’t know he had other motives.

“And he came when I was very vulnerable when I lost my friend, Ada Ameh. He came into my life and said he could not leave because I’m not okay. Yes, I wasn’t okay.

“The death of my friend (Ada) broke me so bad that I could not function. He said he was going to stay with me, I didn’t know he was busy gathering materials which he intends using to blackmail me.

“Afterwards, got my naked video and he changed. He started hitting me and whenever I talk about ending the relationship, he would threaten me with the video and say I’m going nowhere. In my own house, I didn’t have access to anything…this was a guy I gave millions to when he lied that his things were stolen.”

Njamah said her estranged lover was the one who posted the engagement ring, which she said was given to her under duress.

The actress also called on the public to disregard any post on her page till she recovers it.

“I became a shadow of myself. He wrecked me, and finished everything. He took my car, international passport, the remaining money I had left and my other valuables,” she added.

“For now, I need to clear the air, I checked my page and see the video he posted, does that looks like what I would post? I was under duress posting that video called engagement. The ring was burning my hand but I couldn’t talk.”