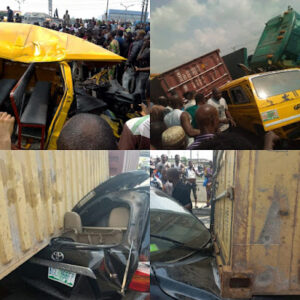 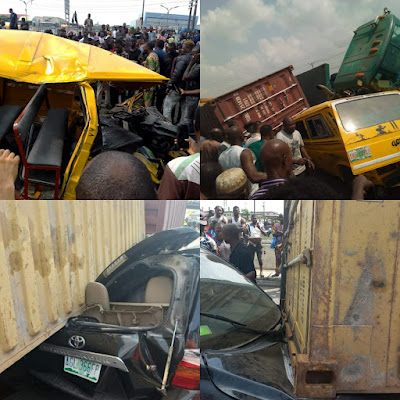 Tragedy struck, yesterday, at the Cele bus stop on the Apapa-Oshodi expressway, after two containers fell off a truck and landed on three vehicles.

One of the drivers in a commercial bus with plate number AKD 489 XZ, who was trapped inside, was killed in the process.

But his passengers and occupants of the two other vehicles, a Toyota Rav 4 with plate number AAA 353 FH and a Highlander SUV with number plate AGL 366 FP, escaped death by the whiskers.

It was gathered that the truck, laden with two unlatched containers, was driving inward Apapa, when it suddenly had a brake failure and in the driver’s bid to use the median to stop the truck, the two containers fell on the moving vehicles, but the commercial bus and the SUV had the worst impact.

Some of the passengers, who managed to escape from the bus, sustained varying degrees of injuries.

One of them, a woman with her three-year-old son, fell in the process of trying to ensure her son was ahead of her. Sympathizers hurriedly carried her to a safe place.

A female driver who escaped from her SUV was too stunned to speak. She was assisted to the median, where she regained her composure after 15 minutes before she put a call to her family members.

Efforts to speak with her failed as she slowly shook her head to decline requests. When her family members arrived at the scene, one of her brothers hugged her and broke down in tears, when he sighted the weight of one of the containers on the driver’s position which his sister occupied before the incident.

But a passenger, who narrowly escaped from the commercial bus, told newsmen that “I can’t tell how it happened. I was reading my WhatsApp chats when I heard noise from outside. By the time I raised my head, passengers were jumping out of the vehicle. I also realised that the commercial bus had been pinned to the median.

“I can’t tell how I managed to jump out through the passenger’s window. All I remembered was the driver telling me to move immediately so he could come out through my side. By the time I came out, the container had landed. I was blank for some time…”.

But the conversation was interrupted by a woman who screamed ” ah, baba Wasiu, Ewa ninu moto yi” ( Baba Wasiu, so you were in the vehicle?)

The woman later introduced herself as his colleague. She instructed him not to speak again and walked him to the other side of the road where they entered a motorbike heading towards Mile 2.

Sympathizers immediately took over the expressway, preventing vehicles from moving towards the scene. Thereafter, they contacted construction workers engaged in the ongoing construction of the Apapa/ Oshodi expressway, to help lift the containers from the commercial bus, in which the driver was still trapped.

A crane immediately came and lifted one of the containers. But it fell immediately on the commercial bus, thereby causing the driver who was earlier seen beckoning for help with his hand, to be motionless.

The deceased was identified simply as Ambrose.

The majority of the aggrieved sympathizers, who thronged the scene, were passengers who had to trek from Ilasa, Sadiku and Ballet bus stops, to Cele because of the gridlock caused by the incident.

They attributed the cause to a lack of willpower on the part of the government to prosecute owners of trucks with unlatched containers and the lingering construction work on the expressway.

One of them, Mr Nadozi Chionye, said, ” There is a law in place to prosecute drivers and owners of unlatched containers. Unfortunately, the Police and Federal Road Safety Corps that are supposed to be saddled with such responsibility are not doing the needful.

“About three months ago, a container fell on a commercial bus at Isolo bus stop, on this expressway, killing a 13-year-old boy, whose father is still lying in critical condition at the hospital.

“Two years ago, on this same expressway, precisely at Ilasa bus stop, two members of Staff of FAAN had the same fate befall them.

“Their deaths were caused by other people’s mistakes, wickedness and negligence. Yet, the government lacks the political will to go after drivers and owners of trucks with unlatched containers “.

On his part, Mr Daramola Oluwaseyi, said, ” The major cause of this tragedy is the lingering construction work on this expressway. They blocked everywhere, subjecting everyone to untold pain.

“We had to trek long distances to board a bus to our destinations. Even when we do, we would spend hours getting to our destinations. Had the construction work been done on time, the container would not have landed on the vehicles, as there would have been a free flow of traffic.

“But no! The diversion caused by the construction resulted in a gridlock on this axis”.

As of the time of writing this report, rescue teams comprising the Police, Federal Road Safety Corps and the Nigeria Security and Civil Defense Corps were on the ground.