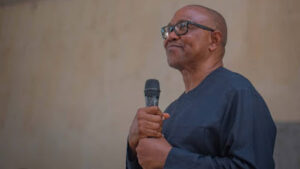 The presidential candidate of the Labour Party, Peter Obi, has vowed to restructure Nigeria’s security architecture if voted into power in 2023.

This is as he said along with his running mate, Yusuf Datti Baba-Ahmed will begin the process of reversing Nigeria’s misfortune.

Obi stated this when he paid a visit to the secretariat of the Rivers State Council of Traditional Rulers in Port Harcourt on Thursday.

He said his administration will give priority attention to the security of all citizens, pointing out that no government can attain set goals and objectives without security.

“What we are doing today is not sustainable. I and our vice presidential candidate want to start reversing Nigeria. That is all we are offering.

“We want to start reversing Nigeria. How are we going to do it? We want a secure and united Nigeria. People will say it is difficult.  No. It is not.

“We need a military that is properly manned. Restructuring our entire security architecture.”

He also wants to increase the personnel of security agencies in the country in order to ensure adequate security of lives and property.

“Our system is not properly manned starting from the police that is in charge of internal security. Today, it is about 370,000 but the Inspection General of Police told me it is 320,000 which is too low for a country with 200 million people.

“It shouldn’t be. We need to increase this number, equip them properly and we must have multi-level policing.

“There is no reason why we should not have a form of security, local government level,” he said.

In his remarks, the Chairman, Rivers State Council of Traditional Rulers, Dandison Diuglas Jaja, appealed for an urgent revival of the nation’s economy.

Jaja stated that the high rate of inflation has increased the hardship being experienced by ordinary Nigerians.

Meanwhile, thousands of supporters of the Labour Party presidential candidate trooped out in solidarity, singing songs and followed his convoy all the way to the Adokiye Amiesimaka Stadium, on the outskirt of the metropolis.

The crowd,.some of who hired vehicles,.while many marched along resulted in gridlock from the Isaac Adaka Boro Park axis of the metropolis through Aba Road.

While his convoy progressed to the venue, hundreds of Obi’s supporters were seen on both sides of the road singling and waving in his direction, as he acknowledged cheers from them.