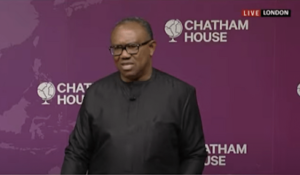 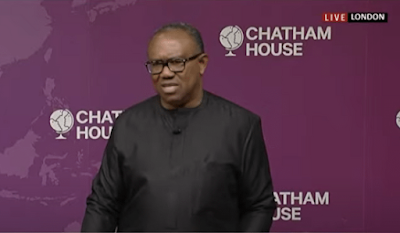 The presidential candidate of the Labour Party, Peter Obi, has laid to rest the fears from some quarters that he may not get the support of the National Assembly if he is elected President in the 2023 general election.

Bringing the concern to the fore at Obi’s Chatham House address on Monday, a member of the audience joining via Zoom asked the former governor of Anambra State how he intended to get the support of the legislature if the Labour Party was not in control of the National Assembly.

Dousing the fears, Obi said he had been in a same situation as governor of Anambra State.

The Labour Party presidential standard bearer said 30 members of the Anambra State House of Assembly were not from his party, the All Progressives Grand Alliance, when he was governor of the state.

He stated that getting the support of legislators not from his party would not be a problem if he was elected President, because he would pursue what is right.

“As long as you’re pursuing what is right, everybody will go with you,” Obi said, adding that “…the legislators want development” and he was prepared to bring development to the nation.

He added, “It becomes a problem when you’re pursuing transactional policies which will benefit you or you’re engaging in nepotism…”

He said if the constitution was respected and governance was inclusive, with respect for the nation’s diversity, there would be no need to worry about whether or not the legislature would work with the executive.