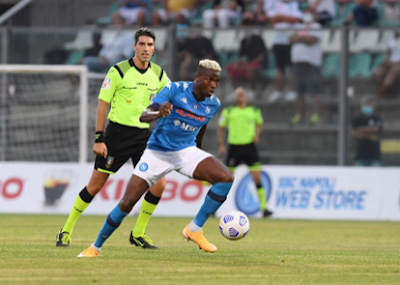 New Napoli striker, Victor Osimhen, has said he cannot wait to play against Juventus star, Cristiano Ronaldo, in his debut Serie A campaign.

Osimhen has moved to Italy, after one impressive season with Lille, where he scored 13 times in 27 league games.

The Super Eagles front man says he is now ready for another experience against “one of the greatest players on earth”.

Napoli are away to Parma for their opening league outing on Sunday, but the 21-year-old also has his sights set on the trip to Allianz Stadium on October 4.

“I’m really looking forward to a new career here in Serie A. Playing against the likes of Christian Ronaldo is something one can eagerly wait for,” Osimhen told the CAF website.

“While at Lille, I had the opportunity of playing against some of the best players in the world like Neymar, Kylian Mbappe and it would definitely be a whole great experience to play against Ronaldo, who is one of the greatest players on earth. So, I’m looking forward to facing him soon.”