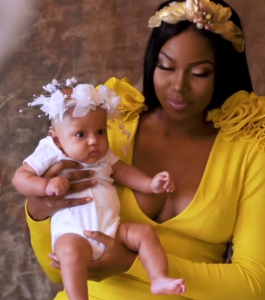 Ghanaian actress, Yvonne Nelson has stated that her daughter Ryn Roberts is protected by God despite the fact that she is exposed to social media at a tender age.

The had the baby for British photographer Jamie Roberts whom she recently opened up about their split. Since giving birth to Ryn, Yvonne Nelson has flaunted the baby girl on social media where she has her own account, a thing many have criticized.

“They have a point because of security and safety but for me, I believe that it’s God who watches over us.

She had her page even before I had her, she is just on Instagram and her father is a photographer, so, if I do not post her, her dad will do, but I’m the only one managing her page… I hardly post her on my personal page”, she stated.