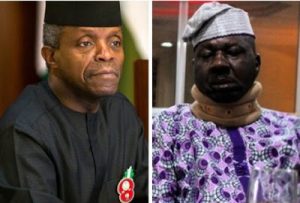 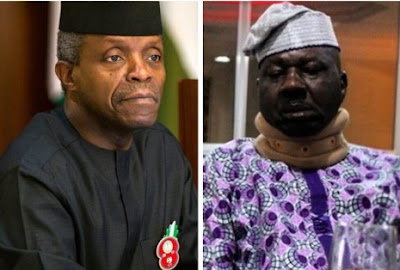 Osinbajo made the donation on Thursday through the Youth Organising Secretary of the All Progressives Congress, Idris Aregbe, who paid a visit to the actor in his residence at the Ikorodu area of Lagos and also offered prayers to him on behalf of the Vice President.

In his reaction, a visibly excited Baba Suwe commended Osinbajo for his kind gesture. He described the gesture as a timely response to his call for financial assistance from well-meaning Nigerians. The actor also told the visitors that he needs the sum of N10m for his treatment abroad.

With this, Osinbajo has joined other Nigerians, including fans, colleagues and friends of Baba Suwe, who have made donations towards the actor’s treatment for Diabetes and associated ailments.

Baba Suwe’s long-time aide and award-winning actor, Yomi Fabiyi, had earlier, in a message posted on Instagram, disclosed that some people had responded to calls to donate funds for the actor’s treatment.

He had written, “Colleagues, such as Liz Anjorin, Iyabo Ojo, Adekaz Films and Marketing, Wale Olaleye and a few others who confirmed deposits and invariably sent some evidence to me. I am equally aware that the national executive of the Theatre and Movies Practitioners Association of Nigeria had sent a delegation through its Lagos Chapter and they will come up with something shortly. All other NGOs are well appreciated.

“Other colleagues and fans of Baba Suwe are also mobilising for funds. Things are looking up. I must commend all those that have visited him at home and donated cash, including Kazeem Abimbola (Jigan Babaoja) and Uncle Kola Olootu, the iconic broadcaster.”

Fabiyi also said that due to additional complications in Baba Suwe’s health, it had become necessary to re-evaluate his condition and to review the cost of treating him abroad to avoid discrepancies.

“As the situation stands, the actor requires urgent medical attention, the cost of which will run into several millions of naira. Flying him out of the country as soon as possible is top priority. We assure Nigerians that the funds realised will be judiciously used.

“In the mean time, Baba Suwe and his family are eternally grateful for the extreme show of love and duty of care from all his fans, colleagues and well wishers at home and abroad within such a short time,” he added.