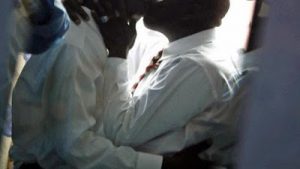 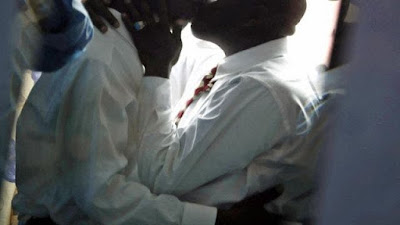 A 42-year-old man, Seyi Balogun arrested by the Ondo state security outfit codenamed Amotekun has alleged that he was lured and seduced into homosexuality by an 18-year-old boy, Tosin Arifalo.

The two suspects were arrested by the security outfit at Kajola in Ijoka, Akure, the Ondo state capital.

It was gathered that the suspects were caught in the act by personnel of Amotekun and have been transferred to the office of the Civil Defence for further interrogation. According to Balogun,” I was never into it before, it was Tosin that came to me saying he loves me.

” l don’t like homosexual act, he seduced me, he lured me into it. I told him to give me rest of mind, but when he was threatening me I have to obey him.

“Since then, we have been having s..e.x together. What I can say is that the devil caused it, and I have warned him not to come to my house again.

But Tosin also in an interview narrated how he was lured by Balogun adding that they have had s..e..x three times before the bubble burst. “How can I lure him into it? He’s saying the opposite.

” Anytime he wanted to have se..x with me, he would take me to his house at Kajola in Ijoka.

According to him, it was Balogun that introduced me to one of his friends, Olojijo who had been having s..e..x with me too”

Tosin added that Olojijo had s..e..x with him many times. Their neighbours who witnessed the arrest described the act as “sinful and an abominable act”