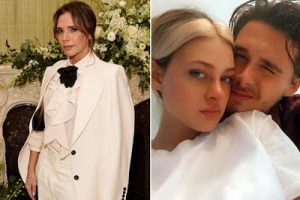 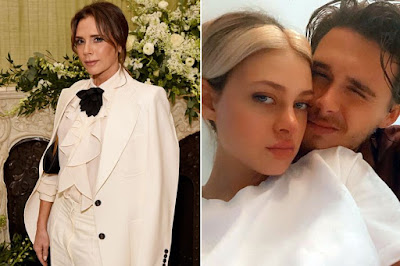 Victoria Beckham is said to have voiced her concerns about her son Brooklyn’s romance with Nicola Peltz.

The former Spice Girls singer, 46, reportedly wants the young couple to tone down their PDAs on social media, with the duo becoming known for their gushing declarations of love on Instagram.

Brooklyn, 22, and Nicola, 26, got engaged after just nine months of dating, and Victoria is worried that things have moved too fast, it’s claimed.

A source told Heat magazine : “If they keep going like this, Vic is worried that Brooklyn and Nicola could be in burnout mode by the time they get married.

“Of course she thinks all their PDAs are cute, but they are very intense, and she’s worried that they are sharing far too much of their relationship and going overboard with the grand romantic gestures.”

Ink-lover Brooklyn has had several tattoos done in tribute to Nicola.

And the couple left their fans baffled when they got necklaces made of each other’s wisdom teeth.

The backlash is said to have worried Victoria, who believes they should “rein it in a bit”, though she loves Nicola.

The source added: “She’s warned him that this honeymoon period won’t last.

“She’s also worried that Brooklyn is throwing everything into this relationship, and could struggle to cope if things went wrong, so he needs a back-up plan.”