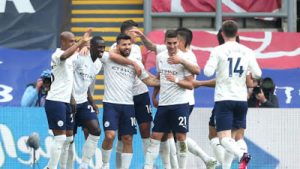 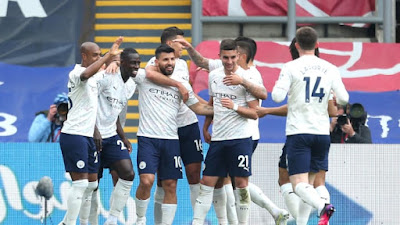 The Citizens who now have 80 points are going to be crowned EPL champions if Manchester United lose their tie against Liverpool on Sunday.

Manchester City and Palace in the first half played out a draw with the away side coming close to scoring.

Pep Guardiola’s men eventually found their rhythm after the interval and broke the deadlock on 58 minutes.

Benjamin Mendy’s inch-perfect ball was controlled brilliantly by Aguero, before the Argentine rifled into the back of the net.

It was 2-0 on 84 minutes when Torres latched onto a free ball around 20 yards out from goal before clinically curling past Vicente Guaita in the Palace goal.

City controlled possession after doubling their lead and comfortably saw out the 2-0 win.

Pep Guardiola, in his post-match interview, said that now, they can begin putting the champagne in the fridge ahead of the celebration of winning the league.