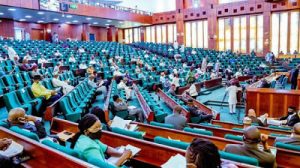 The Peoples Democratic Party caucus in the House of Representatives has asked the Federal Government to lift the ban on the micro-blogging site, Twitter, or it will take legal action against the government as soon as possible.

The PDP caucus described the suspension of Twitter in Nigeria as “one more step in a litany of attempts to restrict the fundamental rights of Nigerian citizens as enshrined in and guaranteed by Chapter IV of the 1999 Constitution.”

The leader of the PDP caucus made this known in a statement issued on Sunday and titled ‘Press Release on Suspension of Twitter in Nigeria.’

The opposition lawmakers recalled that the Minister of Information and Culture, Lai Mohammed, on August 4, 2020, issued an amended 6th National Broadcasting Code for the country “which similarly imposes restrictions on sundry fundamental freedoms.”

The caucus further recalled that when it was convinced that the broadcasting code violated Chapter IV of the Constitution, the lawmakers filed a suit before the Federal High Court, Abuja Division, in Suit No.: FHC/ABJ/CS/1136/2020, between Rep. Kingsley Chinda & 8 Ors v. Minister of Information & 2 Ors, a matter that is still pending.

A statement by the caucus partly read, “As members and leaders of the Peoples Democratic Party caucus in the House of Representatives of the National Assembly, our objectives are to ensure compliance with the rule of law, good governance, the preservation of law and order, fidelity to the principles of constitutionalism and the general adherence to democratic ethos and principles in public administration throughout the length and breadth of the Federation.

“In the discharge of our foremost duty as custodians of the Constitution and representatives of the Nigerian people, we hereby request the Federal Government to immediately reverse the decision to suspend the access of Nigerian citizens to Twitter.

“We also call on the Federal Ministry of Information and Culture to immediately rescind its directive to the National Broadcasting Commission to begin the licensing of social media operators in the country, having regard to the absence of any enabling legislative framework for such directive.

“We, hereby, give you notice that in the event of the failure, refusal and or neglect of the Federal Government to withdraw, reverse and/or cease the implementation of these oppressive and unconstitutional actions, we shall be constrained to institute legal proceedings at the appropriate judicial venue within the shortest possible time.”

The lawmakers said they noted “with great worry” the attempts by the government, through the Minister of Justice and Attorney General of the Federation, Abubakar Malami (SAN), to prosecute Nigerians “who have chosen not to be cajoled by a government intent on violating their right to freedom of expression guaranteed by Section 36 of the Constitution 1999, and who have continued to express themselves through their Twitter handle by using the VPN application.”

According to the caucus, the supposed suspension imposed on Twitter has no legal foundation as executive fiats. “No matter the language they’re couched in, they have no force of law. No citizen can be tried for an offense that has no basis in law or backed by written law and punishment prescribed,” it stated.

The statement further read, “For many Nigerians, social media is not only a means of escape from the drudgery of daily existence but has become a veritable source of employment, advertisement and meaningful engagement. Twitter, in particular, has become an integral component of the citizens’ ability to keep the government in check and to provide real-time feedback on the impact of government’s activities on the citizenry.

“It is worrisome that, at a time when the country faces a real existential crisis and totters on the brink of implosion from acute challenges such as widespread insecurity manifesting in banditry, kidnapping and the activities of armed non-state actors across the federation, coupled with the parlous state of the economy resulting in ballooning inflation and massive youth unemployment, the Federal Government appears to be more preoccupied with stifling the right of Nigerian citizens to freely express themselves on social media and elsewhere.”