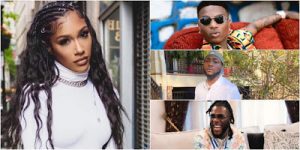 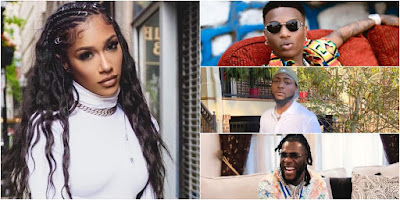 Upcoming American rapper, Bia, has tendered an apology for saying that she did not recognise the faces of Nigerian music stars Wizkid, Burna Boy and Davido.

The artiste made the statement on Friday while she was live on Instagram with popular rapper, Nicki Minaj, to promote their new collaboration.

When asked to chose which of the three stars she would like to have a relationship with, she said, “I don’t know what they all look like.”

The statement did not sit well with Nigerian fans of the artistes who took to Twitter to bash the newbie for her statement.

@Fizzycruzz on Twitter said: “A whole queen of rap knows them and you saying you don’t know what they look like.”

“You don’t know what Wizkid looks like ?? you must be joking,” @ManiaHorluwa tweeted.

Following the outrage, the ‘Whole Lotta Money’ rapper took to Twitter to apologise, and clarify what she really meant by her statement.

“I said I don’t know what they all look like doesn’t mean I don’t know their music. I didn’t mean to offend anyone #LOVE,” she tweeted using the Nigerian flag emoji.