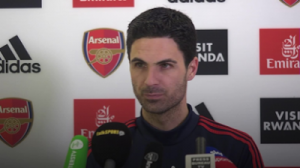 Arsenal manager, Mikel Arteta, has said he is expecting “some new faces” to join the club, when they take part in the Florida Cup next week.

The Gunners are closing in on transfer targets such as Brighton defender Ben White, after agreeing a £50million fee.

With Nuno Tavares already settled in from Benfica, the expectation is that deals will be done while Arteta and his squad are in America.

Following Saturday’s 2-2 draw with Rangers at Ibrox in a friendly, Arteta told Arsenal Media of his immediate plans: “Now a little bit of recovery.

“We trained really hard, played two games, and now we’re going to be travelling to America next week.

“We didn’t have any injuries which is really positive in the first week. We’re going to have some new faces arriving probably, so very positive.”

Arteta is under pressure to deliver next season, after finishing 8th twice in a row.

Arsenal will also not play any European football in the 2021/2022 campaign.