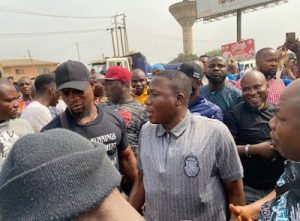 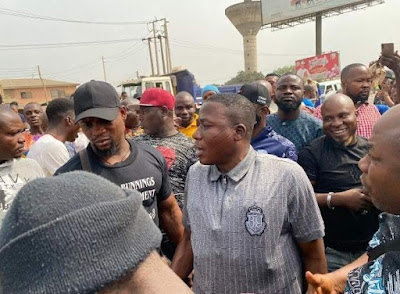 Some Yoruba people residing in Cotonou, Republic of Benin, have thronged the nation’s court where it is believed that extradition hearing of Sunday Adeyemo, a Yoruba youth leader better known as Sunday Igboho, will be held.

Igboho is being held after he was arrested at Cotonou Airport with his wife on their way to Germany on Monday night.

He was declared wanted by the Department of State Services (DSS) early in July after his Ibadan house was raided on July 1, 2021 by the operatives of the DSS.

Two people were killed by the DSS in the late night raid while 12 others persons were arrested and later paraded in Abuja. They have since been charged to court.

In a video on the Facebook page of Olayomi Koiki, Igboho’s media aide, the Yoruba in Cotonou were seen singing solidarity song and demanding freedom for Igboho. They also demanded an independent nation of Yoruba people. They said they have confidence in the Benin Republic justice system, expressing optimism that Igboho will be freed.

Similarly, dozens of protesters gathered at the home of Igboho in Ibadan, carrying placards which have various messages like ‘Igboho is not a criminal, I stand with Igboho’ and so on.

The protesters later proceeded to the streets of Ibadan, calling for Igboho’s freedom. They said since Igboho has not committed any crime or killed anyone, he should not be subjected to the treatment he is going through. The protesters blocked Soka junction road, with hundreds of motorists caught in the traffic.

One of the protesters said: “Help us ask Buhari and his people; what is the offence of Igboho? He asked Fulani herders killing and raping our people to leave; is that an offence? The federal government under Buhari knows where bandits and Boko Haram leaders are but they ignore them, preferring to use Nigeria resources to kidnap peace loving people and put them in jail.

“This government watched a northern cleric romancing bandits, visiting them in the forest but this government still claims not to know bandits whereabouts.

“We call on our south-west governors and Yoruba monarchs to rise up and fight for the people that put them in position. It is not a crime if someone is asking for an end to oppression. The federal government is pushing too far in the way it is handling the issues of Igboho and Nnamdi Kanu.”

The protest was still in progress as of the time of filing this report.