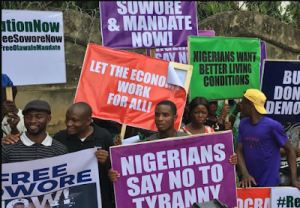 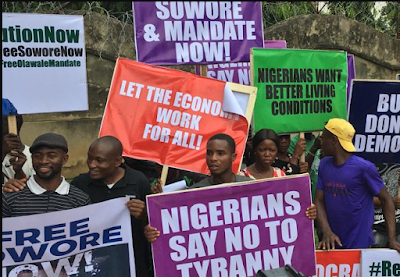 Activists under the aegis of TakeItBack movement have mobilised for a fresh protest at United Nations Headquarters in New York on September 24, 2021.

This is as Yoruba Nation and Biafra agitators had announced to embark on “mother of all protest” at the UN headquarters the same day.

The  President, Muhammadu Buhari is expected to address the UN Assembly on the day of the protests.

The movement announced its plan to hold a protest in a statement titled, ‘Protest Call At The UN General Assembly’, by its Global Director of Mobilisation, Gbola Owoborode, on Monday.

The group listed four demands for the protest among which charges against one of its leaders, Omoyele Sowore, should be dropped.

The statement read, “The TakeItBack movement seizes this medium to invite Nigerians, in and around the city of New York to a protest at the UN General Assembly on the 23rd and 24th of September, 2021 from 9am.

“We are calling on all groups and individuals that are justifiably dissatisfied with the regime’s tyranny, maladministration, corruption and incompetence, to Join us as we protest to make the following demands:

“The regime should immediately free Sowore, unconditionally and drop all charges, of which he has been falsely accused.

“We demand the immediate release of all political prisoners, including Nnamdi Kanu, Igboho and the over 300 endSARS activists still under illegal detention.

“An end to terrorism, kidnappings. and banditry that has completely ravaged the entire country.

“The resignation of the Buhari regime that is incompetent, lawless, despotic, nepotistic and corrupt. It has failed to guarantee the security and welfare of Nigerians which is their primary responsibility as a government. The Buhari Junta must go!”