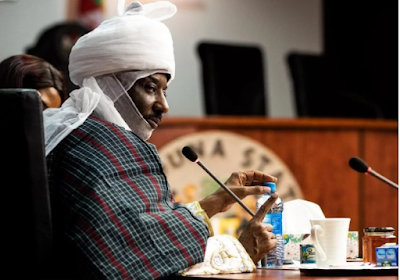 The 14th Emir of Kano and ex-Governor of the Central Bank of Nigeria (CBN), Sanusi Lamido Sanusi, who was humiliated and deposed in 2020 after falling out with Kano Governor Abdullahi Ganduje, didn’t take it lightly when he was addressed as ‘former Emir’ at a Kaduna Investment summit.

It was Muhammad Sani Abdullahi, who was Chief of Staff at the time of the event, who introduced Sanusi to the audience as “the former Emir of Kano.”

And Sanusi, who apparently knew that a reshuffle in Governor El-Rufai’s cabinet was imminent, didn’t like how he was addressed.

“When I listened to the Chief of Staff….I will call him former Chief of Staff…you will understand why I call you ‘former’ later….Next time don’t call me ‘former Emir.’ There is nothing like that,” Sanusi said curtly.

Abdullahi was one of a number of Kaduna political appointees redeployed on Monday, October 11, 2021, in a major cabinet reshuffle. He was redeployed to the planning and budget commission.