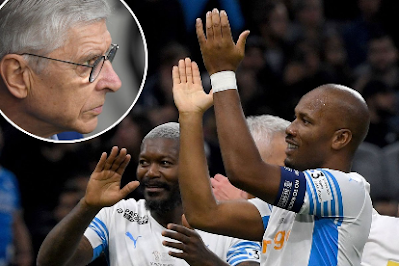 Wenger returned to management to lead a UNICEF XI out against Marseille legends.

Wenger’s side moved into a 2-1 lead at the Stade Velodrome in his first.

However, Drogba stole the show with his trio of goals for Marseille legends.

The Ivory Coast legend found the net twice and then even dusted off his infamous celebration for his third goal.

Formula One hotshot Pierre Gasly was also on target in the enthralling game.