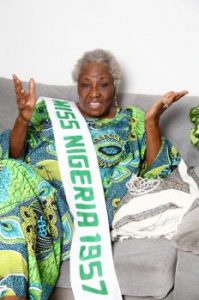 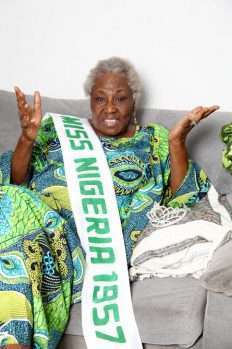 In various interviews, Oyelude had revealed that she became Miss Nigeria by accident.

Her brother who was a broadcaster saw the advertisements for the pageant in the papers and entered her for the competition without her knowledge in Lagos even though she was still residing in Kano.

The rest,  they say is history.

2. She hails from Isanlu in Kogi State.

4. She emerged winner of the maiden edition of the Miss Nigeria pageant in 1957 at age 26. She beat 200 contestants to win prize money of 200 pounds and a return ticket to London for two weeks.

5. She gained admission into the school of nursing, Ashford Kent, England shortly after winning the pageant to study nursing and became a state registered nurse in 1961.

6. She enrolled at the school of midwifery, St. Thomas Hospital, London, where she qualified as a state registered midwife SCM in 1962. She also attended the Royal College of Nursing, England in 1971 and obtained a Diploma in Nursing and Hospital Administration and in 1976, obtained another diploma from Ghana Institute of Management and Personnel Administration.

7. While in the UK, Oyelude practiced in a number of hospitals between 1962 and 1963, notably Paddington General Hospital.

8. She worked in Kaduna General Hospital between 1964 and 1965 on her return to Nigeria. She worked as a senior nursing sister-in-charge of the former Kaduna Nursing home (now Barau Dike specialist hospital, Kaduna) from 1965 to 1977.

9. She was sent to Makurdi General Hospital when the civil war began in 967 where she headed a medical team from the then northern region, which prepared the hospital for receiving war casualties and treating them.

11. She was also an external examiner of the Nursing and Midwifery Council of Nigeria and chaired the Kwara State Health Management Board from 1980 to 1983.

12. Oyelude was honoured at Miss Nigeria pageant in 2015 with a brand new Peugeot 601 saloon car.

The post First Ever Miss Nigeria, Grace Oyelude Turns 90 + 13 Things To Know About Her appeared first on FabWoman | News, Style, Living Content For The Nigerian Woman.