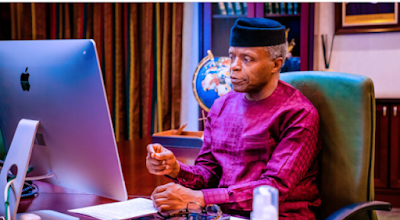 Vice-President Yemi Osinbajo says engaging with the needs of Nigerians in terms of security and welfare is the major concern of President Muhammadu Buhari’s administration.

Osinbajo said this on Wednesday during a farewell courtesy call by Edward Kallon, outgoing United Nations resident coordinator in Nigeria.

According to a statement issued by Laolu Akande, Osinbajo’s spokesman, the vice-president said leaders must constantly engage with their followers to build trust.

“You cannot avoid engaging with the people, (there is need to engage) in such a way that you are trusted, and on an ongoing basis, people should see that you are committed enough to their concerns,” the statement reads.

“People must feel that government is committed to their welfare, security and especially on issues of healthcare and education of their children. So, a social compact is crucial.

“As a matter of fact, it is both a current concern and aspiration for those of us who have been fortunate to be elected into positions in government and in the politics of our country.”

Osinbajo commended the support the country enjoyed from the United Nations under the leadership of Kallon, saying that “we certainly enjoyed the work that you did as UN resident coordinator for Nigeria for the past few years”.

On his part, Kallon commended the president and vice-president for the support he enjoyed during his tenure especially in addressing concerns around humanitarian assistance.

He also commended Nigeria’s COVID-19 response, while describing it as a “miracle”.