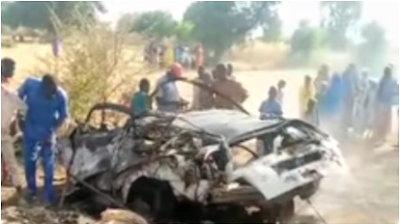 About twenty persons have been burnt beyond recognition in a motor accident along Achilafiya to Karkarna road in Yankwashi local Government, Jigawa State.

An eyewitness told newsmen that the accident occurred when two Golf vehicles had a head-on collision and caught fire instantly.

He said the accident resulted in the death of occupants of the vehicles including the drivers and passengers.

He said the fire prevented the people from rescuing anyone of the occupants of the vehicles.

He said ”the accident occurred on Sunday at about 05:00pm along Achilafiya to Karkarna Road, involving a Golf with reg no. XA 361 BCH and Golf Wagon with reg no. FST 276 CX.

The police spokesman explained that the two vehicles caught fire as a result of the head-on collision resulted in the death of fifteen person.

He said all the occupants of one of the vehicles driven by Bashir Ahmad were burned beyond recognition while the driver of the other vehicle and thirteen of his passengers sustained serious injuries.

Shiisu said all the victims were rushed to PHC Hospital Karkarna for treatment and later died while receiving medical attention.