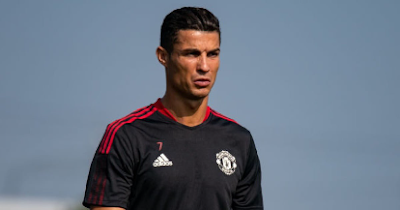 Manchester United forward, Cristiano Ronaldo, was forced out of training on Thursday making him a doubt for this weekend’s Premier League clash at Aston Villa.

The UK Sun reports that Ronaldo had to cut his session short due to a thigh problem.

The 36-year-old missed Monday’s FA Cup win over Aston Villa on Monday as he nursed a hip issue.

He was penned in to return for Saturday’s game against the same opponents but had to be sent home by United’s medical team.

Ronaldo will now be aided by his own private oxygen chamber he has had put in his house.

The club’s last league game saw them beaten 1-0 by Wolves at Old Trafford.

Villa has already got the better of United earlier this season and is aiming for a league double at Villa Park.