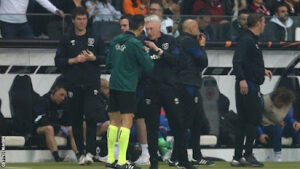 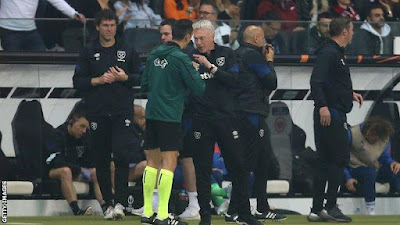 West Ham’s European dream is over as they were beaten in the Europa League semi-final by Eintracht Frankfurt, who will meet Rangers in the final.

Defender Aaron Cresswell and boss David Moyes were both sent off on a heated night in Germany as West Ham failed to set up an all-British final.

Moyes’ side lost their home leg 2-1 but started brightly until Cresswell pulled down Jens Petter Hauge, who would have been through on goal. He was initially shown a yellow card but it was upgraded to a red after a video assistant referee review.

The German side – who enjoyed a marvellously colourful partisan home support – went ahead when the unmarked Rafael Borre hammered home from Ansgar Knauff’s low ball.

The night got even worse for West Ham when a frustrated Moyes booted the ball at a ball boy and was shown a straight red card.

At full-time thousands of Frankfurt fans streamed on to the pitch to celebrate their first European final since 1980.

West Ham had a few chances in the closing stages with Michail Antonio forcing a save from Kevin Trapp and Tomas Soucek heading wide.

The Hammers’ wait for a major trophy will tick over into a 43rd year. It also means no place in next season’s Champions League.

Scottish side Rangers beat Leipzig in the other semi-final to ensure they will face Frankfurt in Seville on Wednesday, 18 May.