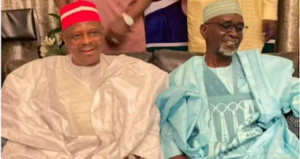 The development comes days after Abdulmumin Jibrin, a former member of house of representatives and a director-general of the Bola Tinubu campaign group, joined the party.

Jibrin’s defection came despite efforts by Abdullahi Ganduje, Kano governor, to prevent the former from leaving the All Progressives Congress (APC).

In a tweet on Tuesday, the NNPP said the former Kano governor has joined the party “finally”, adding that Kwankwaso also paid a “congratulatory visit” to Shekarau on the development.

The relationship between Ganduje and Shekarau has been frosty since the APC held its congresses in the state.

Factions of Ganduje and Shekarau produced different leaders — the Shekerau faction produced Haruna Danzago as chairman, while Abdullahi Abbas is leader of the Ganduje faction.

However, a trial court in the federal capital territory (FCT) had recognised Shekarau’s faction in November 2021 – but the appeal and supreme courts have since set aside the verdict.

Meanwhile, Shekarau is scheduled to meet with his advisory council and members of his constituency on Wednesday over the development.

The former Kano governor is, however, yet to officially announce his defection to the NNPP.