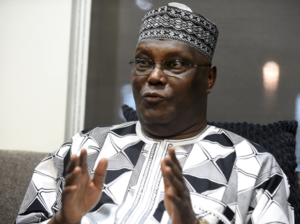 The presidential candidate of the opposition Peoples Democratic Party, PDP, and former vice president Alhaji Atiku Abubakar, has bemoaned the state of the country, asking Nigerians to vote out the ruling All Progressives Congress, APC in the forthcoming 2023 general elections.

Expressing discontent over the failing system, Atiku appealed to Nigerians to come together and ensure that APC is defeated come 2023.

Recall that the APC candidate and former governor of Lagos state, Sen. Bola Ahmed Tinubu, last week sent a strong message to PDP to step aside and be ready to be buried in 2023.

In his words: We will roar! We will do it. The Poverty Development Party, PDP, should step aside, be ready to be buried and leave our country for us to rebuild for our children.

“We will eliminate them, they depleted our resources for sixteen years. They are agents of poverty, terror, violence and lies. They are retrogressive. They left us with hunger. PDP don’t know arithmetic , join me to defeat them come 2023”, he said.

However, in what can be described as a riposte,  Atiku via his facebook handle, appealed to Nigerians to be ready for action, listing some of the sectors that has been crippled by the ruling party.

“My expectation is that Nigerians will collapse the ruling APC in kind via the ballot and enthrone a viable pathway for the New Nigeria of our dreams that will be united and stable, prosperous and awash with opportunities; secured and inclusive. As One, we can get it done”.