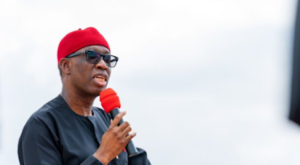 Governor Ifeanyi Okowa of Delta State has dismissed claims that Governor Nyesom Wike of Rivers State would be disappointed that the Peoples Democratic Party, PDP, presidential candidate, Atiku Abubakar picked him as his running mate.

Okowa said Wike is a good democrat who loves the party, hence will not be disappointed at Atiku’s choice of a running mate.

He disclosed this to journalists yesterday at the party’s headquarters in Abuja.

Okowa said Wike understands that when several brothers are in the race for a particular position, only one person would be picked.

According to Okowa: “Wike is a very strong party man, he has a great love for our party, and I believe he is also a good democrat, he understands that when several brothers are in the race for a particular position, it has to be one person at a point in time.

“But I want to assure you that Wike is a very good man, and his interest for this country and the party is to be able to rise up to the challenge at the moment. He is strong, and I do not feel that he is going to be disappointed.”

Atiku had unveiled Okowa as his running mate yesterday in Abuja.

Prior to the announcement, Wike and Okowa were suggested as possible candidates for the position.