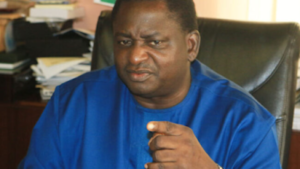 Adesina said men of God should be apolitical like Kumuyi.

He spoke yesterday at the promotion of a book, titled: ‘Kumuyi: The Defender of the Faith’ in Lagos.

Adesina said Kumuyi has remained forthright, and stayed true to his calling, at a time when most men of God in Nigeria took sides politically.

He described the Deeper Life founder as a great man of God.

According to Adesina: “We are glad that Pastor Kumuyi is in that group.

“When Pastor Kumuyi talks, we can listen, knowing that his message is not tainted with politics, prejudice or any other consideration.

The presidential aide said Oyedepo was blinded by his hatred for Buhari following his series of messages against the current administration.