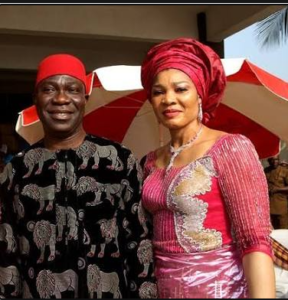 The telephone lines of former Deputy Senate President, Ike Ekweremadu, and that of Uche Anichukwu, his spokesman, are currently switched off.

On Thursday, the London Metropolitan Police had announced the arrest of a Nigerian couple who share the same names and ages as Nigeria’s former Deputy Senate President Ike Ekweremadu and wife Beatrice Nwanneka Ekweremadu.

NigerianEye had attempted to reach the duo amid the arrest, but the lines were not reachable.

In a statement, Metropolitan Police said: “A woman and a man were charged today with conspiring to arrange the travel of a child into the UK in order to harvest organs.

“The charges follow an investigation by the Metropolitan Police’s Specialist Crime team.

“[A] Beatrice Nwanneka Ekweremadu, 55 (10.9.66) of Nigeria is charged with conspiracy to arrange/facilitate travel of another person with a view to exploitation, namely organ harvesting.

“[B] Ike Ekweremadu, 60 (12.05.62) of Nigeria is charged with conspiracy to arrange/facilitate travel of another person with a view to exploitation, namely organ harvesting.

“They have both been remanded in custody and will appear at Uxbridge Magistrates’ Court later today.

“The investigation was launched after detectives were alerted to potential offences under modern slavery legislation in May 2022. A child has been safeguarded and we are working closely with partners on continued support. As criminal proceedings are now under way we will not be providing further details.”

Ekweremadu, who is reportedly a London resident, has been absent at the senate in recent days.

In one of his last public outings in Nigeria, he had said although Presidential Candidate of Labour Party in the 2023 election is from the South East, the Igbos would vote for former Vice-President Atiku Abubakar of the Peoples Democratic Party (PDP).

Ekweremadu had indicated interest in succeeding Governor Ifeanyi Ugwuanyi of Enugu State but he did not secure the PDP ticket.