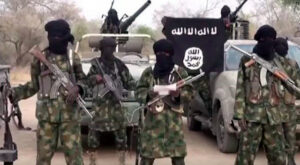 Suspected terrorists have again invaded the city of Owo, Ondo State, as NigerianEye reliably gathered that sporadic gunshots rocked some parts of the town on Wednesday night

NE gathered that the gunmen invaded Craneburg Construction Company around 10:00 p.m. and opened fire on the premises.

Some of the residents told NigerianEye that gunshots were heard when some people suspected to be terrorists invaded the town.

The residents said the incident occurred in the premises of the Cranburg Construction Company around Folahanmi Street in Owo. At least, three persons were said to have been hit by bullets of the gunmen.

The tweet from the command read: “Tonight, there was a shooting incident at Craneburg Construction Company, Owo.

“Policemen are currently at the scene, victims have been taken to hospital and they are in stable condition.

“Security personnel have been drafted to the area.”

She said investigations were already on and urged residents not to panic.

NigerianEye recalls that terrorists had in June attacked the St. Francis Catholic church in Owo, killing over 40 worshippers and injuring dozens of parishioners during a Sunday service.

The terrorist attack on the church had been described as a “massacre” and drew condemnation from both local and international organisations.