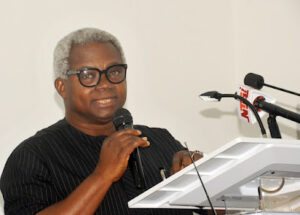 Osita Okechukwu, director-general of the Voice of Nigeria (VON), says northern Christians will not vote for Atiku Abubakar, presidential candidate of the Peoples Democratic Party (PDP).

Okechukwu spoke while fielding questions from journalists in Abuja on Sunday.

He said the APC will change whatever is not working in the country if the party wins the 2023 elections.

“Our first slogan in APC is change. Our mantra is change. We will not remain static, never. We will change whatever is not working. All we ask Nigerians is to give us another 8 years as you gave our sister political party, the PDP,” he said.

“Regarding the northern Christians’ outrage over APC’s Muslim-Muslim ticket; if any pundit thinks they will vote for Atiku, my answer is ‘capital NO’. No matter what, they know he is bringing nothing new to the table.

“But I know that in the fullness of time, contrary to the speculations of spin doctors, they would not vote for the former vice-president.

“Find out. Northern Christians do not trust Atiku. They know his cherry-picking antics as per rule of law and rotation convention. They also know his ambivalence on religion, as demonstrated in the late Deborah’s imbroglio in Sokoto, which is still fresh in the mind of every Christian.

“Secondly, they know that Tinubu and by extension the Yorubas’ DNA is devoid of religious extremism and bigotry. Yorubas celebrate Eid and Xmas together.”

Okechucku alleged that Atiku breached the rotation agreement of the opposition party.

“It is on record that Atiku enjoyed and celebrated rotation convention when in 2018, Governor Nyesom Wike and other southerners in obedience to the letters and spirit of section 3(c) of PDP’s constitution allowed only northern presidential aspirants to contest in Port Harcourt.

“But in the 2022 PDP presidential primary election, he fought tooth and nail to jettison the rotation convention, arguing childishly that it is not applicable to PDP. Hence, breached section 3(c) of PDP’s constitution. Some of us southerners are as hurt as northern Christians over this willful breach.”