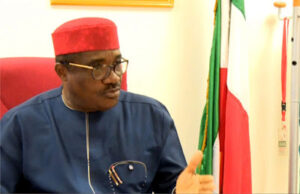 A chieftain of the Peoples Democratic Party in Abia State, Senator Mao Ohuabunwa, has claimed that the N5.2 billion Arochukwu–Ohafia–Bende federal road project he attracted while in the Senate had been abandoned for lack of follow-up by the current representative of Abia north senatorial zone, Orji Uzor Kalu.

Ohuabunwa, who represented Abia north senatorial zone between 2015 to 2019, and is currently seeking the people’s mandate to return to the red chamber in 2023, also regretted that the bill for takeover of the College of Education Technical Arochukwu by the federal government, as well as the establishment of a federal polytechnic in Item, which had all passed third reading respectively, could not be followed up by his successor.

He spoke during the inauguration of members of his campaign council for Abia north 2023 senatorial district election, which took place in Umuahia.

Ohuabunwa vowed to unseat Senator Orji Uzor Kalu and return to the upper legislative chamber of the National Assembly come 2023 in continuation of service to the people towards enhancing their welfare.

The prominent Abia stalwart also used the medium to frown at the precarious condition of the Abia north senatorial zone.

“Nobody speaks for us again. Something has to be done urgently, and for us to recover, we cannot afford to stand aloof. We must speak out now,” he said.

On the rising security problems in some parts of Abia north zone as witnessed in the recent criminal attacks on Umunneochi and Ohafia local government areas, Senator Ohuabunwa condemned the unfolding sad developments in the zone.