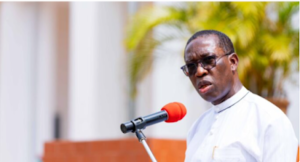 Ifeanyi Okowa, governor of Delta and vice-presidential candidate of the Peoples Democratic Party (PDP), says cyberbullying is becoming a trend in relation to comments over the 2023 elections.

The governor said Nigerians should be allowed to use the cyberspace to express their choices ahead of the 2023 general election, adding that it is important for citizens not to act on emotions, but be guided by knowledge.

“We are beginning to see bullying in the cyberspace of our country, I think that everybody should have space, time, to be able to think, make comments without being bullied,” he said.

Speaking further, Okowa said youths need to be prepared for the future by participating actively in the present.

“The real truth is, our youths, particularly youth leaders, must be in position to have a clear understanding of things so that they are able to guide others aright,” he said.

“This is because if you have a leadership that is not able to provide that true leadership of guiding people aright and people begin to think in the wrong way, then you create further problems rather than finding solutions and we all go the wrong path.”

He called on Nigerians not to practise politics of religion, but to unite to elect leaders that would build a Nigeria where things would work.

Also speaking at the event, Iyorchia Ayu, PDP national chairman, said it is time for Christians to show greater interest in politics.

“I do not think God will just come down and answer your prayer. You need to act too. That way, God will help us,” he said.

“For a long time, many people saw politics as something to be left to others, but I am happy that today, this narrative has changed. Events have made it possible to see that the control of political power is very important.

“Therefore, it is important that Christians have to rise up, come together, and show greater interest in politics.”