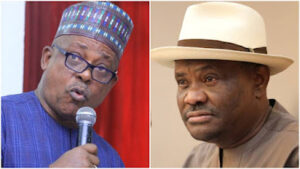 Rivers State Governor, Nyesom Wike has stated why he championed the removal of the former National Chairman of the party Prince Uche Secondus.

He said this during a live media chat held in Port Harcourt on Friday.

The governor said the move followed the resolution of the southern governors’ forum during a series of meetings last year.

According to Wike, “in that meeting, it was agreed that whatever it is, President Muhammadu Buhari coming from the North has done eight years and therefore for inclusion the next president should come from the South.

“By constitution of the party, this is what is stated. It was not as if it was a personal thing.

“In order to allow our decision in the southern governors forum this has to be done.”

The Governor, however, said he was surprised to see that some of the governors who were conveners of the meeting started “shifting”, saying the chairmanship position should not be zoned.