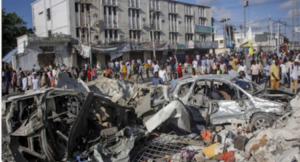 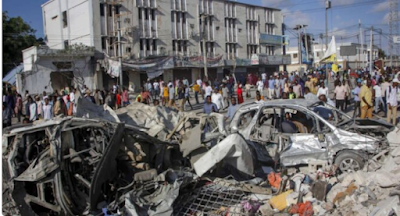 At least 100 people were killed, including women and children, after two car bombs exploded in Somalia’s capital of Mogadishu on Saturday.

According to the BBC, the two car bombs exploded within minutes, leaving buildings and vehicles in the area destroyed.

The first bomb explosion hit the ministry of education and then the second went off as medical teams arrived to deal with the aftermath of the initial blast.

Hundreds of people were said to have gathered at the site of the blasts looking for missing family members.

Somali President Hassan Sheikh Mohamud said among the victims who have been massacred include mothers with their children in their arms.

He condemned the attack via a Twitter post and claimed that the al-Shabaab group, which has ties with Al-Qaeda, in Somalia was responsible.

“Today’s cruel & cowardly terrorist attack on innocent people by the morally bankrupt & criminal Al-Shabab group cannot discourage us, but will further strengthen our resolve to defeat them once & for all. Our government & brave people will continue to defend #Somalia against evil,” he wrote.

Although there has been no immediate claim of responsibility for the attack by the al-Shabaab, the group has claimed other attacks in the past.

In a video statement after visiting the scene of the attack, Mohamud said more than 300 people were wounded in the attack.

“I am here to tell the Somali people that such October attacks will not happen again, God willing,” he said.

“The bombings were a message sent by the militants to show that they are still alive, despite the fact that they were defeated on the battlefield by government forces.”

In August, at least 21 people had been killed in an overnight siege after Islamic militants attacked the Hayat hotel in Mogadishu.

At the time, Ali Haji Adan, the country’s health minister, had said 117 people were also injured in the attack.

The al-Shabaab extremist group later claimed responsibility for the attack on the hotel.