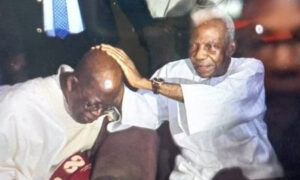 Asiwaju Bola Ahmed Tinubu, the presidential candidate for the All Progressives Congress, claimed that President Muhammadu Buhari, APC governors from the North, and other Northern leaders have shown to him that Nigeria can survive its unity and other challenges.

Tinubu stated this on Sunday in Akure, Ondo State capital at the home of Afenifere Leader, Pa Reuben Fasoranti, when he presented his policy document and action plan for a better Nigeria, to Afenifere leaders.

Recalling his earlier meeting with Pa Fasoranti on March 4 this year, when he was conducting a national consultation ahead of the APC primaries, Tinubu said he made the Afenifere leader a promise that he would return after receiving the APC ticket.

Asserting that he had come to maintain his word, Tinubu urged Yoruba leaders to express gratitude to the Northern Governors and President Buhari for their resolve and commitment to keeping their word.

Speaking further about President Buhari’s candor and assurance of his support to ensure he wins the election, Tinubu added that “the North proved to me Nigeria can survive its unity. Some people want President Muhammadu Buhari to announce someone but the President said No. He insisted the process must go on democratically.

“Northern APC Governors resolved that the Presidency must go to the South and especially South West. Governor Nasir El-Rufai, Abdullahi Ganduje and others supported me to the end. The battle was tough and at a point I was in doubt. There were many rumours and I became confused of what to believe.”