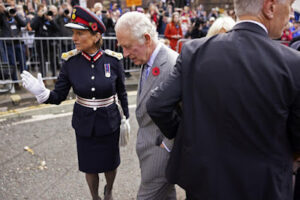 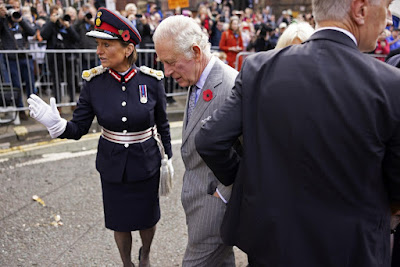 King Charles III and his wife Queen Consort Camilla narrowly avoided being hit with eggs thrown at them during a visit to northern England on Wednesday, British media footage showed.

The 73-year-old monarch and Camilla, 75, appeared to be targeted with three eggs which landed near them during a walkabout in York, before they were ushered away by minders.

A man was heard shouting “this country was built on the blood of slaves” and “not my king” before he was detained by several police officers as the incident occurred, the footage showed.

The protester also booed the royal couple before he appeared to lob the eggs at them, according to reporters at the scene.

Other people in the crowds that had gathered at the historic Micklegate Bar location for the visit started chanting “God save the King” and “shame on you” at the protester.

Charles and Camilla continued with a traditional ceremony to officially welcome the sovereign to the city of York by the lord mayor as police detained the suspected perpetrator.

They were in the historic city to attend the unveiling of a statue of Charles’s mother Queen Elizabeth II, the first to be installed since her death on September 8.