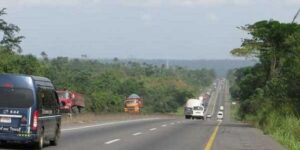 Commuters and motorists taking the Lagos-Ibadan Expressway have expressed concern over the continuous kidnap attacks on the road.

They lamented that plying the road either in the day or at night had become dangerous.

The road users raised the alarm following attacks by suspected gunmen in military camouflage on travellers in the last two days.

It can be recalled that the gunmen, on Tuesday, attacked an 18-seater bus on its way to Lagos from Ibadan, Oyo State.

Some passengers were reportedly shot during the attack, while men of the Ogun State Police Command were said to have arrived at the scene after the incident.

NE gathered that the gunmen also attacked motorists on Wednesday.

It was learnt that many people turned back after getting information of the attack.

One of the victims, who spoke on condition of anonymity for security reasons, said the gunmen robbed her and her co-travellers.

She said, “It happened around 5pm on Wednesday. They shot in the air multiple times and this led to panic.

“It was as if they were in a hurry; they were probably running from the police because they quickly collected our valuables and returned into the bush some meters away from the Onigarri Bus Stop.”

A video of the incident posted on Instablog9ja and seen by NE showed commuters turning back from the road due to the reported attack.

Some commuters said they would avoid plying the road until the gunmen were arrested by security operatives.

A road user, Bolaji Jokotoye, said, “I am not going to travel on the Lagos-Ibadan Expressway for the time being. It is becoming unsafe and security agencies are not doing anything about it.

“These guys are becoming more and more confident every day.”

A driver, who identified himself simply as Jamiu, said there was a reduction in the number of passengers plying the route.

“As drivers, we pass through this road with faith. It is becoming scary and risky every day. These people have turned that Onigarri Bus-Stop to a regular spot and government is not doing anything about it,” he added.

The Ogun State Police Public Relations Officer, Abimbola Oyeyemi, said he was not aware of the Wednesday attack.

He said, “I am only sure of the attack on Tuesday. But as I am talking to you, the Ogun and Oyo states Commissioners for Police are on the road for on-the-spot-assessment. We are there now; we are brainstorming on how best to solve the insecurity on that road.

“Don’t forget that these hoodlums used to be on the road until last year when our officers attacked and killed some of them and recovered three Ak-47 rifles from them, while some escaped with injuries.

“It was those that escaped with gunshot injuries that regrouped, and they have started launching attacks now; but we will never allow them.”