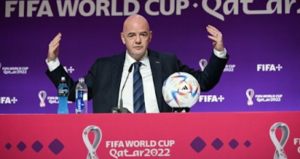 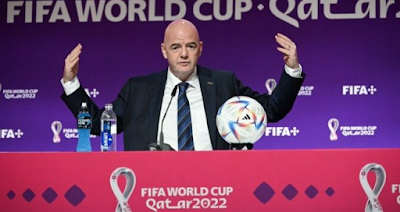 Gianni Infantino, FIFA president, says football fans going to matches at the 2022 FIFA World Cup “will survive” if they’re not allowed to have alcohol.

Infantino spoke on Saturday during a press conference to usher in the World Cup in Doha, Qatar.

Qatar, hosts of the Mundial, had earlier announced that fans will not have access to alcoholic beverages within stadiums.

Citing similar laws in some European countries, Infantino backed the decision of the Arab nation.

“I think personally if for three hours a day you cannot drink a beer, you will survive. The same applies in France, Spain, Scotland,” he said.

Qatar, accused of buying the World Cup hosting rights, has also been in the news over alleged poor conditions of migrant workers, a situation Infantino described as media fantasies.

Infantino, an Italian national, tore into the “hypocrisy” of European and Western nations for dwelling on negative stories around the World Cup despite their chequered past.

“I am European. For what we have been doing for 3,000 years around the world, we should be apologising for the next 3,000 years before giving moral lessons,” he said.

“If Europe really cares about the destiny of these people, they can create legal channels – like Qatar did – where a number of these workers can come to Europe to work. Give them some future, some hope.

“I have difficulties understanding the criticism. We have to invest in helping these people, in education and to give them a better future and more hope. We should all educate ourselves, many things are not perfect but reform and change take time.

“This one-sided moral lesson is just hypocrisy. I wonder why no one recognises the progress made here since 2016.”

Declaring Qatar ready to host the world, the former UEFA chief, who became FIFA president following the infamous exit of Sepp Blatter in 2016, added that the latest edition will be the best ever.

“It is not easy to take the critics of a decision that was made 12 years ago. Qatar is ready, it will be the best World Cup ever,” he said.

“I don’t have to defend Qatar, they can defend themselves. I defend football.”

The Qatar 2022 FIFA World Cup will take place across the country between November 20 and December 18.