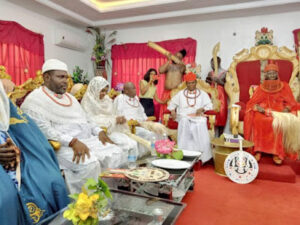 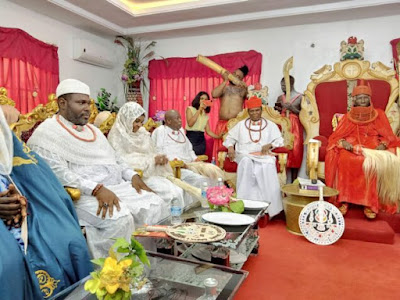 Governor Abdullahi Ganduje of Kano State has called for unity among various ethnic and religious groups in the country, to enhance national integration.

Ganduje made the call on Saturday while receiving a chieftaincy title at Olomu Community in Ughelli South Local Government Area of Delta.

The governor and his wife, Prof. Hafsat Ganduje, were conferred with chieftaincy titles by the Ohworode of Olomu kingdom, Richard Ogbon, Ovie Ogoni-Oghoro 1.

Ganduje said “our differences are our sources of strength”, stressing that every ethnic nationality in Nigeria had a unique personality that, when properly harnessed, would take the country to a higher level.

“This title has taken the national integration to a higher level, it is important we believe in one another, and trust, irrespective of the differences in our religion, ethnic or geographic location.

“Today a history has been made, history that is good for the development of our nation,” he said.

According to him, as a student at the Ahmadu Bello University (ABU), Zaria in 1973, some of them reacted negatively while some demonstrated in favour of the policy, unknowing that it was a policy to institutionalise national integration.

“I was posted to the defunct Bendel State in 1975 as a corps member and I served in Isoko. We were coming to Warri, a commercial town in the Delta axis.

“It was interesting, the people were praying and giving us various foods at no cost. So, I am in love with the Urhobos, Isokos and Itsekiris. Even when I left, we were still exchanging pleasantries,” he said.

Ganduje said that the chieftaincy title was a reflection of the robust relationship he had with the late General Dominic Oneya, former Kano State Military Administrator, a native of Agbarho Community in Ughelli North Local Government Area.

“No doubt, this chieftaincy title, there is a history behind it. When late General Oneya was posted to Kano State, he dissolved the cabinet and retained me in his cabinet.

“He was friendly, hardworking and we were so close. I maintain a good relationship with Urhobos.

“To make the relationship complete, I appointed Oneya’s son as my Special Adviser in charge of Lagos State Affairs. This is how Nigeria can be promoted through national integration.

Speaking with newsmen, the commissioner for information in Kano State, Muhammad Garba, said that the conferment was an indication that Nigerians needed to unite.

“For the king to have invited the governor and conferred the chieftaincy title on him, and for the governor to have accepted, is an indication that we should appreciate our diversity.

“An indication that we need one another to progress. I am happy with the installation and hope that it will further facilitate the relationship between the North and South.

“This conferment will further facilitate the relationship between the Urhobos, the entire People of Delta and Kano State. I assured you that this is the beginning of our relationship with the people of this area,” he said.

Mr Anthony Oneya, son of late General Oneya, described Gov. Ganduje as detribalised Nigerian who always worked for the unity of the country, adding that he operated an open door policy.

“The governor appointed me as his Special Adviser on Lagos Affairs. As a non-indigene, he deemed it fit to make me an SA, to always give him reports monthly about the activities of the Kano people living in Lagos State.

“With this title, we have come to honour the governor for finding ways to unify Nigerians. I knew the governor as a child growing up when my father was a military governor of Kano State,” he said.

Mr Fred Akhigbe, the Enojie of Edo Community in Kano State, said that the title was an indication that Nigerians would continue to unite.

“Though tribe and tongues may differ, in brotherhood we stand,” he said.

In the governor’s entourage were members of his cabinet, traditional rulers and representation of the various ethnic groups in Kano State.